“I was painfully aware of him, each moment spent near him adding to my interest and my desire to know him better. Which, praise be to God, eventually came just a few months later…”

Mr. Gore came to our small town that May to take on a summer internship at our church.

A high school graduate now, I was nearly on an equal playing field with this young college boy, even though I still had the summer left before I would officially graduate from the youth group.

Thankfully, in the confines of our tiny town, he was forced to finally take notice of me, and before too long, he even knew my name.

And oh, how he could set my heart to beating!

It was difficult, being under his authority and tutelage, unable to even think about pursuing a relationship, yet wanting so badly to be noticed by him. Our youth group was full of attractive and wholesome young ladies, and at the time, though they would laugh at the idea now, many of my friends were also interested in this new boy; his presence that summer definitely sent a jolt of energy through the fairer members of our small town’s youth group. In fact, I would say the matchmaking mothers were even more atwitter than I was…

But it wasn’t too long before I noticed that, although a summer romance was strictly forbidden, there was an electricity between the two of us that surely I wasn’t the only one feeling. He was admittedly a bit of a flirt…what young, single man would not have enjoyed all that attention?…but when our eyes would meet, we would both begin that tell-tale fidgeting, and although he had to leave me guessing that entire summer what he really thought of me, I could sometimes read in his eyes that he admired what he saw. (And well he should have, the little toot!)

Thankfully, I had a little help in my pursuit of this romance. My bosom friend, Misty, and I concocted a game that summer to gauge Mr. Gore’s interest in me; both of us were back-up singers in our youth group’s praise band, and when we were on the stage during church services and he was in the congregation, I would yawn while Misty kept her eyes peeled to see if he yawned, too. Because, you know, yawns are contagious. Neither of us were very good at math, but that game was genius, if you ask me!…

and I’m sure it didn’t interfere with our worship. Not at all. We were super gifted at multi-tasking.

Anyhow, by summer’s end, after a week-long mission trip to Seattle that pushed us closer and closer together, I would say that I had very much fallen in love with…my gosh, there is a lump growing in my throat!…this most amazing man. I don’t think I could ever make a universal statement on the subject of soulmates and being “made for each other,” but I do know this…my heart, before we ever even went on our first date, was his. Forever. 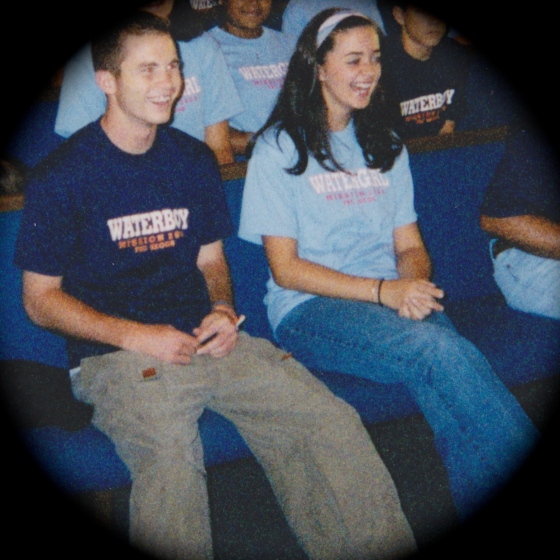 And so I was absolutely bereft when he returned to college that Fall without ever declaring any kind of love, or even interest in me. We were now very good friends, to be sure, but nothing else. We had even gone to dinner and a movie with a dating couple in our church…not that we actually sat by each other in the theater (and believe me, the awkwardness was palpable when we chose seats on either side of the couple rather than next to one another…how were we supposed to brush hands in the popcorn bag when we were 3 seats away from each other?!).

And for the first time in my life, I truly pined for a man. I didn’t realize it at the time, but I became a bit listless, and even lost weight in his absence. Church became dim, no longer the place where I knew I would see him, but the place where he had been…

And so I can’t tell you how touching and sweet is the memory of the day when I sat at the kitchen table, feeling so forlorn and lonesome, not even aware of my sad countenance or that anyone was watching me, when my Daddy spoke up from his place at the table’s head. “Don’t worry, Lester…he’ll be callin’.”

My head snapped up, his words pulling me out of a fog. I had no idea my Daddy even knew of my secret love; I had hardly discussed it with anyone. “You think so?” I asked, kind of breathless and embarrassed at the same time. “You betcha.” he said, bolstering my spirit considerably, for my Daddy is the best judge of character that I know; if he thought Mr. Gore would call, well then, he would call.

Turns out, Daddy was wrong. He didn’t call.

But he did e-mail me…

And I e-mailed him back.

And he e-mailed me again.

And I e-mailed him back.

And on October 28th, 2000, we met up with my now sister-in-law Amy and one of her friends at a Coach’s restaurant in Norman to watch the OU vs. Nebraska football game. It was one of those “non-date” kind of outings that we actually claim as our anniversary now, because somewhere between our appetizer at the restaurant, the football game, the 30-minute drive to a youth rally where I was singing and our youth minister was preaching, and the 2-hour drive back to my home, we became an item. Love still had not been declared, nor had he even asked me to be his, but believe me, the feelin’ was mutual, and we both somehow knew it…

and “the blushing” had just begun!